Rovaniemi is very close (in Lappish scale) to one of the biggest Finnish ski resorts, Levi. The ski resort is famous for its variety of downhill skiing options. And indeed it has 43 slopes where many Finnish ski centers feature less than 10 slopes. In addition, it has hundreds of kilometers of cross-country skiing trails too. And almost 1000 km of maintained snowmobile tracks. That was the reason we chose Levi as the starting point for our snowmobile adventure. Definitely stop by if you are on a road trip in Lapland or across Finland.

We’ve been to Levi before, but that time we didn’t explore the area much. Except skiing, we’ve visited a reindeer farm and a husky farm and one night we went snowshoeing. Not only we saw northern lights (Aurora Borealis), but also we slid down the ski slopes on our bums as we were too lazy to go down the hill.

Anyway, we didn’t know Levi’s surroundings too much. The closest place that we visited often earlier was Pallas – Ylläs National Park. We did many cross-country and snowshoeing trips there because we wanted to avoid crowds in Levi. But for snowmobile adventure for beginners, like us, Levi seemed a perfect spot, because of the extensive network of tracks.

AirbnbExperiences near Levi – If you are new to Airbnb, grab your discount here!

Check the prices and availability of GetYourGuide Activities.

If you have no prior experience driving snowmobile, you should probably consider snowmobile safari with a guide. That will let you get to know how to drive the snowmobile and see if you enjoy it. Sometimes it can be much more tiring than driving a car. There are many companies that offer snowmobile experience. We chose Levin Tunturilomat and we didn’t regret the choice. Their office is located in the center of Levi and after a snowmobile ride, you can head straight to the spa to warm up in the sauna if the weather is cold.

Professional and friendly staff quickly dealt with all the formalities before driving. We got a map of snowmobile tracks around Levi. We have already chosen our destination, Kumputunturi, in advance, but the staff had some nice suggestions that we will try next time. Pallas – Ylläs National Park is connected by snowmobile track too.

Before we even noticed we were heading out of the office to the snowmobile parking lot wearing warm overalls that we got. We also had all our clothes including winter jackets under the overalls. And it’s a good decision for the whole day outside especially if you’re a passenger. Remember that the driver shouldn’t drink before driving snowmobile. Also, you need a driving license to rent the vehicle and during snowmobiling, you must respect all traffic signs and rules. We got a comfortable snowmobile for 2 persons, but Levin Tunturilomat has also more powerful single rider snowmobiles. As mentioned before, we wanted to get to Kumputunturi, a nearest fell except the Levi fell. It is about 50 km to get there following the snowmobile tracks. First, we needed to go out of the rental place to the track network. The connection is a quite narrow passage between pine trees, but easy to drive and very short.

Levin Tunturilomat location is not only good because it’s central in Levi, but it’s even better in terms of driving the snowmobile. After the short pass through the trees, you reach a big lake, Immeljärvi, where you can practice driving, learn to feel your snowmobile so that you know how it behaves. It’s also a great place if you have the need for speed. Just remember 60 km/h speed limit 🙂 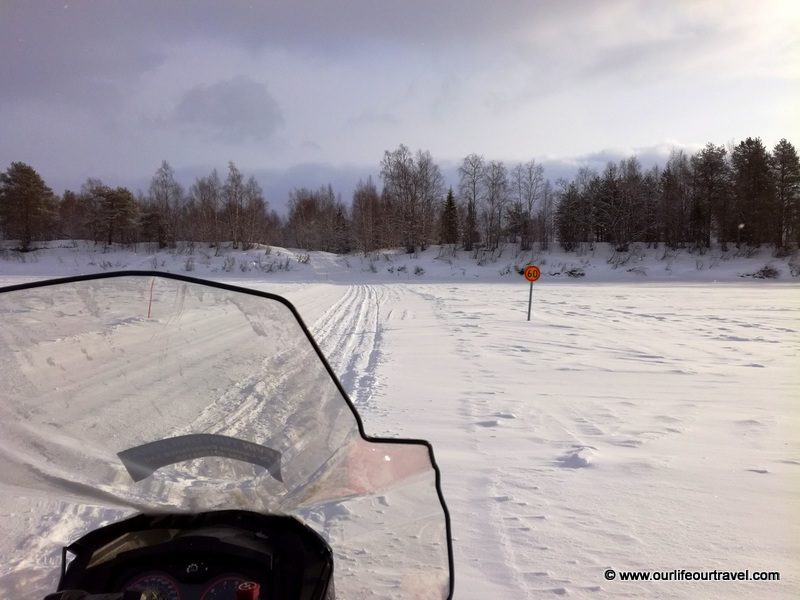 From the lake, we went around Levi to Luvattumaa snow castle. On the way, we passed trail leading to the fells in Pallas. We were tempted to turn, but we decided to stick to our plan. All the crossroads are well marked with directions signs, so it was easy to follow and we barely needed to check the map we got. The way to Kumputunturi goes through the usual Finnish forest. From time to time when crossing mire you can enjoy the faster drive as the track is flat and smooth. In the forest, some sections can be very bumpy. Just before the crossroad with the trail to Kumputunturi, there is a cute, little cafe serving coffee and sausage for snowmobile riders. The cafe is in the middle of the forest and accessible only by snowmobile, but in the country where sausage and coffee are so popular, it’s no wonder that the business works well. Finally, we arrived at the crossroad where the trail to the top of the fell starts. It’s a short dead-end trail, but definitely worth taking. In the beginning, we went very slowly, because the track was uneven. The more up the better the way was. Also, you can observe the changing landscape. Trees are getting smaller and around the top, there are no trees at all. Only snow everywhere.

There is an open wilderness cabin too. It’s possible to have a break by the fire inside the cabin. In winter the cabin is nicely covered in hoarfrost and the snow reaches windows. When turning back to go down be careful as the terrain is not flat, so it is quite easy to roll over the snowmobile especially if going accidentally out of the track into deep, soft snow. We were happy to make it to the top even though the visibility was not the best, but the place is definitely worth checking. Unlike Levitunturi there are practically no people. In general, the snowmobile tracks are for the greatest part empty except the tracks in the vicinity of Levi. After Luvattumaa snow hotel, we met less than ten snowmobiles. On the way back we took the same trails back. When we reached the Levin Tunturilomat track we continued straight as we still had some time left to enjoy driving. We went to the south of Levi and then on the way back we refueled. Going to the gas station with a snowmobile was another unique experience on that day. In addition, on the way to the station, there is even a roundabout on the track. The time has passed very fast. We saw many nice places and we learned how to drive the snowmobile in different terrain and conditions.

It wasn’t enough for us for the day though and we decided to check the Levi fell what we didn’t have time for on snowmobile. We went up by a car road that leads almost to the top. From there we enjoyed the sunset colors of the sky. Disclosure: We received a discount in exchange for writing about our experiences.